W.K. Kellogg Foundation: No More Pizza, Burgers, and Nuggets for Our Kids! 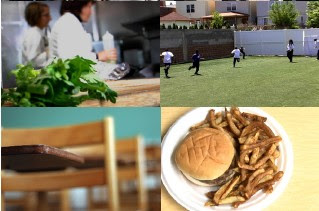 A new survey commissioned by W.K. Kellogg Foundation, which consulted over 800 adults from across the country, found that nearly two-thirds of parents of school-age children describe local school food as “poor” or “only fair.” They insist that pizza, chicken nuggets, French fries, tater tots, hot dogs, and hamburgers, should be cut drastically from school menus.

More than 85 percent said fresh fruit and vegetables should be offered every day in school cafeterias. Asked about factors contributing to the obesity epidemic, 71 percent listed cutbacks in recess and physical education as a significant factor. Eighty-six percent recommend requiring 60 minutes of exercise in the school day.

You can read the full article here.

Warmly,
Avis
Posted by BirdsNestProductions at 9:13 AM No comments:

1. Sen. Blanche Lincoln, D-Ark., Chairwoman of the U.S. Senate Committee on Agriculture, Nutrition and Forestry today unveiled the Healthy, Hunger-Free Kids Act of 2010 last Wednesday, March 17th.
2. Bill includes 5 years of funding for federal child nutrition programs of WIC, NSLP & NSBP.
3. Bill provides $4.5 billion in new child nutrition program funding over ten years, a significant increase over previous efforts. The highest previous increase was $500 million over ten years.
4. The $4.5 billion in increased funding would be divided, with $1.2 billion going to increasing the number of children who receive free and reduced price meals and $3.2 billion going to improvements in the quality of meals and fighting childhood obesity.
5. This legislation will also mark the first time since the inception of the National School Lunch Program that Congress has dedicated this level of resources to increasing the program’s reimbursement rate.
6. Lincoln said the bill would pay for itself through a $2.2 billion shift in the environmental quality assistance program.
7. Ranking Member Saxby Chambliss (R-GA) supports the bill.
8. The $4.5 billion increase is less than half of the $10 billion-over-10-years increase that President Obama proposed in his fiscal year 2011 budget, but Lincoln said it would provide “a path” to achieve Obama’s goal of ending childhood hunger by 2015.
9. The provisions included in Lincoln’s Healthy, Hunger-Free Kids Act requires the Secretary of Agriculture, through a transparent regulatory process, to establish national nutrition standards consistent with the Dietary Guidelines for Americans for all foods sold on school campuses throughout the school day. Including soda, vending machines and other loopholes.
Posted by BirdsNestProductions at 8:46 AM No comments:


"I make my son Ben's lunch everyday: turkey or salami sandwich, raw carrots, raw green beans, raw broccoli tops, a cheese stick, a whole apple and cup of yogurt. He has lost 20 lbs since I started making his lunches this year. That just goes to show you how much fat and junk was in the food and that he was eating at school and the food I continued to feed him at night because he said it was "what he liked.” Now, he loves his lunches of fruits and veggies, and kids at his table are begging him to share his green beans and broccoli. It all depends on what these kids are exposed to. Ben also watched Supersize Me recently and was horrified. My other son Alex eats almost every meal at Los Olas, a fresh Mexican food place. The food is nutritious so I don't mind."
Posted by BirdsNestProductions at 1:41 PM No comments:

Check out our NEW website @ www.lunchthefilm.com
Posted by BirdsNestProductions at 8:18 AM No comments: